DY Consultants is an active member of the American Society of Civil Engineers Air Transport Group for the Metropolitan New York Area and looks to contribute to the growth of this organization. Mr. Dennis Yap, President of DY Consultants chaired a session and collaborated with the FAA, February 10th, 2016, to provide a discussion on the latest developments related to NextGen Technology and the FAA’s position on Unmanned Aircraft Systems. We were privileged to have Mr. Carmine Gallo, the FAA’s Eastern Regions Administrator, make this presentation to the group. Mr. Carmine Gallo, is responsible for the aeronautical system that encompasses Delaware, Maryland, New Jersey, New York, Pennsylvania, Virginia, West Virginia and the District of Columbia. The region under his jurisdiction oversees operations at some of the world’s busiest airports including, JFK International Airport, LaGuardia Airport, Washington Dulles International Airport, Newark International Airport, Ronald Reagan Washington National Airport and Baltimore/Washington International Airport. The session was attended by representatives of airport operators, planners, environmentalists and engineers from the Metropolitan Area. 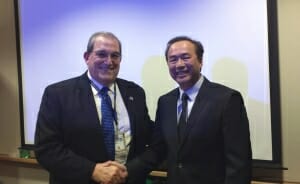 The FAA with NextGen is taking the next quantum leap in air traffic control. The agency is ushering in a new era of state-of-the-art, satellite-based technology and procedures that are making the world’s safest aviation system even safer, delivering passengers to their destinations faster and with greater efficiency, while reducing aviation’s impact on the environment – called NextGen . NextGen is one of the largest infrastructure projects in U.S. history and additional benefits will be realized to the aviation community in the future:

Industry Benefits ($ 2.4 Billion). The industry benefits include the cost savings from FAA efficiencies and from the additional flights enabled by increase capacity and reduction in travel costs.

Societal Benefits ($80.1 Billion). The societal benefits consists of savings in passenger travel time and in the reduction of carbon dioxide (CO2) emissions.

The FAA is nearing the end of the foundational phase of the program. By the end of the year, the FAA expects to have completed the infrastructure that will enable additional layers of operational improvements. Performance Based Navigation, or PBN, is an example of added NextGen capabilities that will be made available to the flying public. PBN is satellite-based navigation routes and procedures that enable aircraft to fly more direct flight paths, resulting in decreased air-to-ground voice communications with increased flight predictability.

Mr. Gallo also provided a talk on the FAA’s position on addressing Unmanned Aircraft Systems (UAS). Unmanned Aircraft (UA) is legally defined as an aircraft that’s operated without the possibility of direct human intervention from within or on the aircraft. The UAS industry is growing quickly. People and businesses want to be able to use this relatively inexpensive technology to aid in the work they do every day. With any new technology, there are things that the flying community are not aware of. It requires additional research, regulations and additional answers before the FAA could fully integrate UAS into the National Airspace System, which the FAA is fully engaged in.