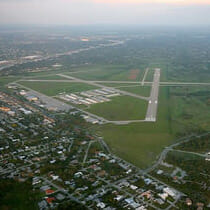 The approval of the Airport Layout Plan (ALP) ended years of continuous dialogue between city officials, community members, airport users and the Federal Aviation Administration. Several years of spirited discussions had resulted in the loss of millions of dollars in FAA funding due to disagreements about a vision for the airport. DY Consultants proposed a different approach toward master planning, involving open-minded thinking, transparency and innovation. The success of the program resulted in not only a consensus among the stakeholders, but also a stable environment for the airport, the trust of the FAA and funding for the project.

DY Consultants steered the project through major technical hurdles, including:

Resolving these contentious issues, DY Consultants rallied support from officials at the highest level, including the FAA administrator. DY Consultants’ successful approach to resolve all of those long-standing issues was characterized by the city council as “creative,” “innovative,” “outstanding” and “awesome.”

DY Consultants is grateful for the opportunity to have worked on this challenging and rewarding project.