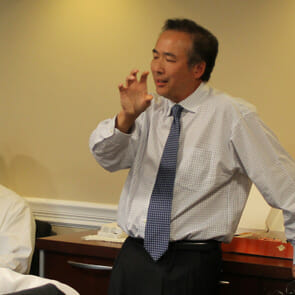 Dennis Yap of DY Consultants presented his opinion on the state of affairs related to airport planning for general aviation airports at the 2012 New York Aviation Management Association (NYAMA) Peer Training Session. The greatest challenge in completing a successful master plan for an airport is obtaining approval and consensus from the community and stakeholders. A contentious relationship between airports and the local community is not unusual. The best way to handle this situation is to develop a credible and trusting relationship by implementing a strong outreach program.

There has been and there remains a perception by communities surrounding airports, that the master planning process is biased and their involvement has little to no impact upon the final plan. This opinion is based upon a long history of community involvement with little effect upon the outcome. Their attitude puts a negative light upon the process and makes gaining consensus a difficult goal to achieve.

One technique to aid in this process is to insure the stakeholders that the process will evaluate impacts for both, the community, as well as the airport. The standard FAA master planning process is effective to meeting the needs of the airport, but often does not address concerns of the community. It is important to identify what these concerns are, and truly study, analyze and evaluate the issues at hand, even if they are not a requirement of the FAA Master Planning process. This effort provides credibility to the process while gaining the trust of the community with the professionals, the airport, the elected officials and the FAA.

Another concept that Dennis suggested is to proceed with a “Visioning Plan”. The Master Planning process can be considered a quantitative process that is based upon numbers generated from forecasts. This often is a stumbling block for the process. Stakeholders, the FAA and the Airport will generally disagree on the outcome and there have been times where this has actually stopped the process completely. It is sometimes effective to allow stakeholders to develop their “vision” for the airport, regardless of the outcome of the forecast. This has resulted in a focused approach, eliminating infeasible alternatives (such as closing airports or restricting traffic) and providing a direction to move forward. Once a vision has been established, there is a stronger possibility that the community and the airport can work as a team, rather than as adversaries.

The main point that Dennis was making was that the traditional methods, used for airport planning may not be the most effective and we should always keep an open mind with regard to planning our airports.